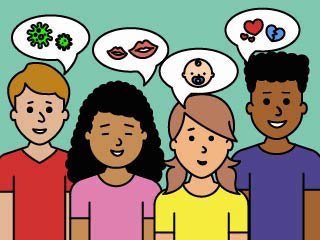 Is HIV the same thing as AIDS?

NO. HIV is NOT equal to AIDS. HIV stands for Human Immunodeficiency Virus. HIV attacks a person’s immune system, the part of our body that fights sickness.

Without treatment, HIV can lead to AIDS, which stands for Acquired Immunodeficiency Syndrome.

AIDS is much more severe than HIV, but still only transmittable through five bodily fluids:

Once a person develops AIDS, their body has a very difficult time fighting off other illnesses. This is why people die from AIDS-related illnesses, but not AIDS itself.

Can I get HIV by sharing food?

NO, not at all. HIV cannot be transmitted through sharing meals.

HIV is most commonly transmitted through sex with a person living with HIV, through sharing needles during drug use, and from mother to child during pregnancy, birth, or breastfeeding.

All of these methods of passing HIV to another person can be avoided:

What is informed consent?

Informed consent means voluntarily agreeing to sexual activity with the knowledge of what is being offered. It’s the individual’s right to decide whether he or she wants to engage in sexual activity. When sex is forced, or both parties haven't given consent, the ethics of sex are called into question. Forced sex can have long-term physical and mental repercussions that are hard to predict. Unfortunately, teens are having unwanted sexual experiences at increasing rates.

If you know someone who has been forced into unwanted sex, they need your support now more than ever. Listening is a good start. Encourage them to speak to a doctor or nurse so that they can have any necessary medical help. Telling an adult you trust is another positive step to take.

Does having HIV mean I'm going to die?

Should everyone get tested for HIV?

ABSOLUTELY! Everyone should regularly get tested for HIV. In fact, many people who are living with HIV do not know their status. Testing is the first step to living a healthy, happy and long life. Keep in mind that even if you have been tested recently, if you've had sex or shared needles since your last test, your status could have changed.

Is abstinence the only option?

I this I might have HIV. What should I do?

GET TESTED If you think you might have HIV, the best thing to do is get tested right away. While it can be scary, knowing your status is the first step to being healthy. The earlier you know, the better. The testing center will also provide counseling about how to stay negative or what to do if you are positive.

Have something to add to this article?

That the real answer

© The Internet of Good Things